MIDNITE HELLION: Greetings, thank you for having us! We have just released a brand-new 7” single titled “Hour Of The Wolf” on Witches Brew, which came out on Black Friday, November 29th. Two editions were produced; one being a limited pressing of 100 hand-numbered translucent blue vinyl and the other being a limited pressing of 400 hand-numbered on classic black vinyl. While we are currently completing writing for a full-length release, we plan to have it completely written and fine-tuned over the winter months and hope to start recording in the spring. A friend of ours is also releasing an authorized live bootleg cassette on his label, Contaminated Tones. It was recorded on November 16th and it should be hitting the shelves anytime now, so keep your eyes peeled for it!

Drew Rizzo: I’ll try to keep it as brief as possible, haha! The band was formed in April 2011, and the first lineup consisted of Jaron Gulino on bass and vocals, Alex Kulick on guitars, and I on drums. However, the initial lineup was short lived, as Alex exited in May, bringing in Amadeus Zajac and Dan Sclavi on guitars. Jaron exited shortly afterward, and singer Sonny Zackeo and bassist Bill Dripps came on board in July 2011. While preparing for our debut show, Amadeus had to step down and Mario DiBartolo joined as a temporary guitarist. Our demo, “The Fever,” was released on November 17th, 2011 on Hels’ Trash Industries at our third show, which was supporting Obituary. The first pressing sold out within three weeks, leading to two subsequent pressings, the last being on Else’s Metalecke exclusively for the 2012 edition of Germany’s Keep It True festival. Scott Alpert took over the reigns as a temporary singer after Sonny left the band in April 2012, and our EP, “Enter The Unknown,” was released on September 29th, 2012 on Else’s Metalecke. A tour of the Northeastern Seaboard of the US followed, supporting Prime Evil, however, Scott had to step down from the helm after the tour, with Mario also announcing his leave.

In March 2013, we were introduced to guitarist Nick DiGiovacchino. There was an instant connection, and he joined the fold, making his live debut when we supported Diamond Head in April. During the month of May, Cheryl from Witches Brew got in touch with me with news of reactivating the label and expressed interest in working with us. Having established a great rapport with her while I was in a previous band, it was a no brainer that Witches Brew was the right choice! Later that month, I came across an advertisement posted by singer PJ Berlinghof, who shared the same influences and aspirations. Shortly after supporting the Trenton, NJ stop on OZ’s first ever US tour alongside October 31 and Attacker, PJ came down for an audition, having learned enough of our original material to have performed a live show that night. Needless to say, she has joined the band, solidifying the lineup once again! Presently, we continue to write and perform live, honing our skills as a band and ready to kick some ass at any given time!

Nick DiGiovacchino: Traditional heavy metal, through and through.

Bill Dripps: Heavy Metal. We try not to box ourselves in to any specific sub genre, but if I have to get specific, I’d say we play a mixture of Traditional and Speed, with a hint of Thrash thrown in for good measure.

PJ Berlinghof: A mix of the best of classic metal with speed, thrash and death elements thrown into the mix.

Dan Sclavi: I would say Priest meets Maiden with some thrash influence thrown in.

DR: I’d say all things Heavy Metal. I do not wish to pigeonhole the band into a specific genre or category, and I consider all sub-genres of Metal to be under the umbrella of Heavy Metal. By labeling ourselves, it prevents us from experimentation and can limit which styles we wish to draw from. For example, our song “Cross The Line” off of our “Enter The Unknown” album is a hybrid of Traditional Heavy Metal, Thrash Metal, Speed Metal, and Death Metal. If we said we wished to only be one style, then we would not have been able to write and release that song if we were pigeonholed and wished to remain as such. We all are into and influenced by various genres of music as a whole, not just Heavy Metal, and I feel that it’s reflected in our compositions. However, at the heart of it all, the flag of Heavy Metal is flying proudly.

BD: Collectively among the lot of us, I’d say 70’s and 80’s metal, ranging from the NWOBHM bands to Thrash.

PB: Personally, my main influences lie primarily in the NWOBHM, but I listen to a very wide range of metal and rock – doom, speed, thrash, power metal, black metal, southern rock, hardcore, you name it!

DS: For me, I like classic Thrash Metal the most such as Exodus, Slayer, and OverKill. I also like the classics Black Sabbath, Maiden, and Priest. 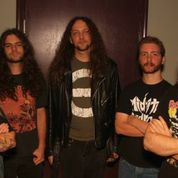 DR: Excellent! Everybody who has a copy has only provided positive feedback thus far. The packaging alone has received high acclaim, not to mention the music contained on the wax. 120 units total out of 500 units pressed have moved in the three weeks since its release, which I think is truly awesome, and these are all online sales. Already, the translucent blue edition is sold out in both the US and in Japan, and not many copies remain in Germany directly through Witches Brew! We have also just started working with Clawhammer PR, who already has proven to be a huge asset. I’m excited to see what new things will come with our partnership.

DR: Satisfied is an understatement, as Cheryl has gone above and beyond! Five Milligrams from Indonesia did a tremendous job on the front and rear cover artwork, couldn’t have been more satisfied with it! Cheryl took it one step further and made certain that each piece of art gets a proper display. She and I worked together to create the extras included within the package, but as excited as we were while in the planning phase, nothing could have prepared us for just how awesome the final product is! The translucent blue vinyl comes with a sticker replica of the front cover art, and both editions come with an A1 sized poster of the rear cover artwork, merchandise order form, and lyric sheet. If you are not familiar with an A1 sized poster, pardon my language, but it is fucking huge!!! Extremely proud of this release, more than words can state.

PB: Personally, I’m psyched about the single. I have to give credit where credit is due and thank Len Carmichael again for all of his hard work and his ability to not only get great performances out of everyone in the group, but to produce a punchy, killer mix. Outstanding!

DS: Yes I think it sounds great. Writing, playing, and production are all good.

ND: Everything came together for a quality mix that gives the songs what they need.

DR: Production was a dream! We worked with Len Carmichael again on this release, after having such a positive experience with the mixing and mastering on our “Enter The Unknown” EP. Not only is Len a top notch engineer, he’s also an excellent producer and knows just how to push somebody to get the right take out of them. Len was completely involved with the whole process, he could almost sense what we wanted before we told him, and he made things extremely easy. I look forward to working with him again on our full-length. You know, there hasn’t been one bad thing about this release whatsoever. Everything has worked out perfectly.

DR: We tend to write together so all voices are heard on it. A typical setting will be all of us sitting down with guitars and practice amplifiers, presenting and feeding off of one another’s ideas. Once we get a basic skeleton of the song, we’ll bring it into a rehearsal where we’ll do a formal jam on it to see how it runs and also to fine-tune it.

PB: Since I’m new to the band much of the material that I’m working on is pre-existing, but I’m writing lyrics and developing the vocal melodies for the new material.

DR: We currently are finishing writing material for our full-length, in which we are making steady progress on. If all goes well, we should be able to start tracking in the early spring months and hopefully have the record out by the summer. As briefly mentioned before, a live cassette from our latest show is being released shortly, which was recorded in November and will be released by Jon Norberg and Contaminated Tones. Contaminated Tones is doing a series of live authorized “bootlegs,” but bootleg it most certainly is not. Jon has painstakingly taken the time to do the layout in the ways of old by cut and paste and photocopying. It also will be the only release of ours to feature the first draft of our logo, which was edited and made into the one you see today. We have a few area performances in the works, including a make-up date for our show with Attacker, October 31, Liege Lord, and Leech in Brooklyn, NY, which was postponed. April will bring our Midwest debut at the Ragnarökkr Metal Apocalypse Festival in Chicago, IL, where we will be performing alongside Grim Reaper, Hallows Eve, Riot, Picture, and many more excellent bands! After Chicago, we will complete the full-length, if not done so already, and will embark on our second tour to support it upon its release. Terrain is to be determined, but we’re hoping to make it across the pond on the next trek!