– Hello and, first of all, thank you so much for answering to our questions. How is everything doing right now with COFFIN ROT, right after having released your debut album? How does it feel?
Things with the band are far better than we ever would have expected and we are really grateful for all the love and support we are getting from people all over the world. The album comes out on October 18th and we couldn’t be more excited for everyone to finally hear it. A lot of time and effort has gone into this process and we are really proud of the outcome and think everyone will be happy too.

– How was COFFIN ROT born? What’s your music background?
Derek, Tre and I were in a death/thrash band together and we decided after playing together for a few years that we wanted to start over completely. New name, new style, everything. We started fresh and within three months we had our first rehearsal demo out.

– Already with your second demo you managed to create some buzz into the underground, getting a good welcome. Did you expect the demo to reach so many people? In fact Rotted Life was behind its release, how did you end up with them so early on your career?
When the first rehearsal demo dropped, no one seemed to notice. So once we released the second demo online, the same thing happened. Nothing. We hit up a few labels and none were interested so we thought was gonna be it. After being online for several months, I got a random Facebook message from this guy named Jason who starting a brand new label called “Rotted Life” and wanted us to be his first release. At that point, we would’ve let ANYBODY put out that demo so we of course agreed and we are really happy we did. Jason is a great dude and treats his bands wonderfully. I would send any new band towards him in a heartbeat.

– And then you did the split with MOLDER. How did everything arise?
Twenty years or so from now when Molder is headlining Maryland Death Fest, I will lift my head high when I let people know that they actually approached us doing a split together. I had never really heard of Molder before Aaren messaged me to gauge my interest in doing it so we were a little hesitant at first despite their demo being really really good. Honestly, what made me really wanna do it was when I found out that Aaren and Ramon used to be in the band Nefarious which is a band I was a huge fan of when they were still active. It turned out to be the best move we ever made as and because not only did people absolutely love that split, we made legitimate friends out of those guys. 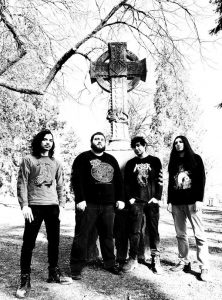 – Having been formed in 2017 we could say things have happened quite fast for you guys. How has the band evolved and grown from the first demo to this first full-length?
I think the biggest change is the way we write songs. We used to all get in a room together and bounce ideas off of Tre while he riffed around and it ended up giving us a few songs with pretty generic formats. Now Tre writes full songs on his own and then just sends us recordings to critique and add input to.

– Sometime ago I read you were aiming at getting  a second guitar player for the album. What happened with that?
The quick and simple answer is that we are still actively searching for the right person. We’ve done a few auditions and have talked to some people but everyone that can keep up with Tre is already in surplus of bands so it makes it very difficult.

– The sound on “A Monument to the Dead» is very swampy and organic. How did you record it? How did the whole production process go?
We recorded the album with Charlie Koryn who has recorded everyone from Torture Rack to Funebrarum and has played drums for Incantation, Skeletal Remains, Ascended Dead, Funebrarum, and countless other amazing bands. He also recorded our second demo and our half of the split with Molder. What sets us apart from a lot bands is that we don’t record to a metronome. We want our recordings to have that organic, almost live sound and feel so the occasional, slight tempo change gives it that organic sound.

– On the record there are some tunes that were part of your demos. How have they morphed?
All four songs from our demo made it onto the album which wasn’t the original plan. I wanted to leave off the song “Coffin Rot” because I was never happy with the way it turned out on the demo. The only reason it was included was because we basically rewrote it. The demo version is about five and half minutes and the new and improved version is over seven minutes long. We took some unnecessary filler out of the middle and added a really interesting outdo that feels a lot different than the rest of the record and gives it a nice close. That is the biggest change people will notice. Aside from that, the new version of Incubation of Madness features guest vocals by Aaren of Molder and Forced Self-Consumption has some cool sounding guitar harmonies that got added. Saw Blade Suicide is still the same old song that everyone initially fell in love with.

– On this release you remain loyal to your style and to OSDM, from the cover to the sound. What’s to you the most important in an album of the genre? The overall feeling? The filthy sound? Or is it a mix of different elements?
In my opinion, organic production, subject matter, riff style and atmosphere are the most important elements. If you’re an over-produced, stiff sounding death metal band that writes about politics or whatever, no one is gonna be interested. Death Metal is supposed to be ugly, repulsive music for ugly, repulsive people. Keep it simple and gross and you’ll do well. 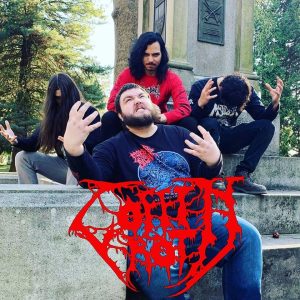 – In fact a lot of bands are nowadays playing this kind of traditional Death Metal, but I think you stand out because you manage to capture the right mood. In your opinion, what would you say differentiates you from other bands into the style? Or what’s the ingredient a band into the genre needs to pass the test of time?
Most newer “OSDM” bands are trying to sound like Entombed, Incantation or Mortician and the ones that are going for the Florida sound are just blatantly ripping off Death. I think we stand out because you hear mostly the Florida sound but you also gets hints of New York, Sweden, Finland, Midwest and English death metal. Everything from Morta Skuld to Benediction.

– There’s now an obvious resurrection of old school Death Metal. Is it easier to get out there due to the growing interest or the fact that there are a lot of bands doing this makes it harder?
The popularity makes it easier to be spotted but it makes it harder to rise to the top. There are so many great death metal bands just in our city alone that it makes it really challenging to stand above the rest, but it’s a challenge we welcome. We want to be viewed as a top tier modern death metal band and hopefully this record gets us in that conversation.

– Your brand of Death Metal is very straight forward, with a somehow rocky structure. How do you approach the songwriting?
Since I talked about the music writing process already, I’ll talk about lyrics. I watch a lot serial killer documentaries and spend tons of time online researching horrific diseases, exceptionally brutal crimes and torture techniques. I also get a lot of influence from old horror films. Almost everything I write about is based on something very real and horrifying. For example, the first track on the album is called “Copremesis” and what that is is a rare disease that causes your intestines to swell and you eventually throw up fecal matter. It’s common name is “Fecal Vomiting Disease.”

– It also has a good sense of melody that doesn’t take off your overall brutality. How easy is to get a good equilibrium between these apparently opposite elements? Do you take advantage of melody to make aggression have a bigger impact?
Honestly, that is isn’t something we’ve ever even mentioned amongst ourselves when working on songs. Tre is just a super well-rounded guitar player so he has a great ability to combine melody with brutality and it ends up being something really cool and catchy.

– In your sound I can hear nuances from Swedish Death Metal, also American Death Metal, from IMMOLATION to AUTOPSY or even early CANNIBAL CORPSE but, what have been some of the most influential bands for the sound of COFFIN ROT?
Cannibal Corpse, Morbid Angel and Obituary were the original influences for us but we have also been influenced a lot by Morta Skuld, Suffocation, Carcass, Autopsy, Disma and lots of others. A lot of times I’ll send Tre a song and tell him to write stuff that sounds like that song.

– The cover artwork also has hints to some of the aforementioned bands. How did you work on it and who was in charge? What was the idea you had for the cover?
The artist sent me a message and told me he was having a hard time coming up with non-literal ideas for the cover and asked for my input. I laid out my idea of a dark stone torture dungeon lined with bones, blood and corpses and at the center, a woman being tortured on the rack. I mentioned Considered Dead and Butchered at Birth as pieces to gain influence from and he absolutely nailed it. The artwork far exceeds anything we could’ve hoped for and will definitely be using him again. 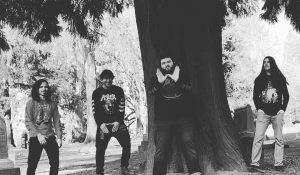 – All this about “A Monument to the Dead» being said; how could you describe it in just 3 words?
Punishing, Groovy, Unique.

– And finally, what are now your near-future plans?
After the release of the record, we are doing a 3 date mini tour in the midwest United States with Molder. We’ll play Chicago, Detroit and Indianapolis. After that, we’ll keep working on new material (which we are doing already) and hope to have a new release out sometime next Spring and a West coast tour to go along with that. Most likely another split.

– That’s all, thank you once more for answering our questions. If you want to add some final words; feel free to do it.
Thank you for giving me a platform to speak about the record and our music and thank you to all the fans around the world that support Coffin Rot. Trust me, it does not go unnoticed.