– Hello, lots of thanks for answering our interview. You are on tour right now so, how is everything going? How are the new songs working live?

Everything is going great! The new songs have been a lot of fun to play. The reaction has been amazing. Almost as if we’ve been playing these songs for years. Really cool.

– You recently released your new album, «Wrongdoers». How has its feedback been so far? And are yourself satisfied with the final outcome?

Again, we couldn’t be happier. We are very grateful that our fans love the record. We made it for them more than anyone. We wouldn’t have released it if we didn’t think it was the best thing we could do.

– Before creating this album you had a line-up change that resulted in the replacement of three members. How has this affected what we hear on «Wrongdoers»? What have the new members brought to NORMA JEAN?

Goose and John were in a band together previously. That may not seem like a big deal, but all we saw was that they already had chemistry as a “rhythm section.” We saw that as a great opportunity to build that part of Norma Jean. I think you can hear that throughout Wrongdoers. Jeff is a riff machine. He brought a lot of ideas to the table. Almost too many. Such a great guitar player. All three members helped to bring a new energy to NJ that was needed.

– This is your first opus in 3 years, in fact I read the creative process was a bit long and you pushed back the recording sessions a few times so, how was this whole process? Has it been something positive for the album to take your time with it?

It was hard at first, we felt like we weren’t getting what we wanted from the record. In that time we feel like the record was making it’s own sacrifices. We always feel like a song writes itself in a way. We just try to go with the flow. That flow must have been to scrap songs and push the record back three times.

– «Meridional» got an overwhelming response so, did this have something to do with wanted to make everything sound the best you could? Did you work under any kind of pressure in order to top over your previous opus?

It’s always hard to know what we’re going to do next after finishing a record. Meridional definitely lingered a little bit, but once we were able to shake that, we were able to make this record work. It wasn’t easy but we never expect it to be.

– After giving «Wrongdoers» some spins I would dare say this is your grooviest effort to date. Was this how you envisioned the album since the beginning?

It definitely is! and no, we didn’t envision that at all in the beginning but when we started to see the direction it was taking, we all got very excited and embraced it.

– It’s also faster, darker and heavier. Was this something you were striving for or maybe each album you release is just a mirror of the moment when the album was released and of where you were at that time as individuals?

I think that’s just the natural progression of Norma Jean, but like we always say we feel like record write themselves. This record in the end is was we all wanted, but in way didn’t know that’s what we wanted.

– That heaviness and darkness contrasts with your usual melody and more experimental sounds. You have always had that kind of mix though, but I think this time is more obvious, like contrasts play a bigger role this time around. How important are contrasts on this record? 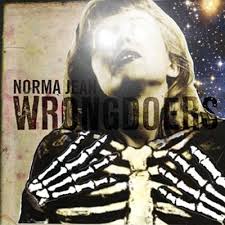 We love dynamics. Volume and mood dynamics. There are all sorts of ways to incorporate them. I feel like that is something heavy music is missing these days. Space, melody, jagged riffs, slow burning parts. Music is meant to be explored. Too many bands stick to a basic formula. I personally think that’s boring. I like the idea that music is meant to take you somewhere.

– Also tunes as «Sun Dies, Blood Moon» show a really well-crafted, well-thought and mature songwriting. I guess making your compositions and sound more mature with each new album is just a natural progression but, does this also mean evolution for NORMA JEAN is a constant process?

We are gearing up for a headliner and will most likely begin writing right away.