– Hello Oeds and first of all thank you for taking your time to answer to our questions.  MOLASSES is real, the EP is out, your gig at Roadburn is played. How are you? In  what point is MOLASSES now?
We are starting to look ahead a little, now that we felt a bit of the potential that we  have as a group.  There is a lot to explore and we’re taking our time.

– MOLASSES was one of the commissioned bands for this year’s Roadburn, a  festival which is basically your home. How did you experience your performance  there? I guess connecting with the crowd and transporting all the feelings and songs  on stage might infuse the material new life. What are your memories from your  performance there?
Everything from the performance itself and the whole year we worked towards it was  a blessing. It gave us the chance to discover eachother in a new light, and ourselves.  You sort of get thrown into a pit as well because however you may look at it, it is your  first performance as a group. And with material never played before on a stage and  with that the first time anyone else then you hears it. So it is very unique, can’t really  compare it to any other performance i’ve ever been part of.

– As I was saying, Roadburn is your «family», in fact the first TDB show ever was  there, in 2008. What does it mean to you the relationship you have with them and the  fact of playing there, be it with MOLASSES, TDB or any of your other bands?
Roadburn has always been very special to me, celebrated death and birth at the  same time there. And reinvented our creativity multiple times. Its great there is a  place that does that to people and Walter has so much heart for it and picks up on a  lot things no one else would.

– You are named after the song that closed SELIM LEMOUCHI AND HIS ENEMIES’  «Earth Air Spirit Water Fire». Why? What does it represent?
Its a song very close to us, it represents the glue between the here and now and the  parallel universe we’re are aiming towards.

– When did the EP and MOLASSES start to take shape? Did it happen only when you were commissioned or was the idea of doing something together already in your  mind?
The idea of doing something was always in my mind, and I guess also in the others.  But we we’re all busy with totally different things. Sometimes it started to itch a little  but then I always thought the right moment will present itself. And it did at the perfect  moment when everyone was totally ready for something new. So some of the ideas  we’re brewing for a while but came to life during the project others we’re totally new.

– The simple fact of reuniting and reconnecting to do something completely new feels  almost spiritual. Why was this the right moment to do it? What had to happen, how  did you need to grow or what did you have to go through to get to this point? Because the creative energy in the EP is strong, and also in you as individuals, both from what we hear on the EP as from what we perceive from your career.
We had to overcome a lot to be able to take this on. Be strong enough ourselves to  give this group of people a new face.  And let go of previous ventures that some of us we’re stuck in. It took a lot but it feels  right. 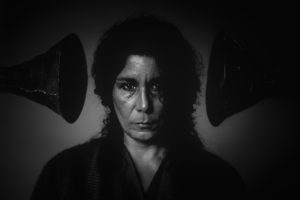 – As I’ve mentioned MOLASSES is doing something new but of course you have  your background and your baggage. What do you want to convey with MOLASSES?  Do you choose how much of your baggage you must infuse in what you are doing or  is everything more natural than that?
We try not to choose and rationalize, it has to come from a different place. We’re trying to turn of the mind in the best way possible. And the music is a product  of that.

– It’s the kind of release that I think it has to be experienced and not just listened. The  kind of album you truly experience if you are in a certain mindset or mood, a mood that is anyway built on the listener as the EP progresses. You transport and create.  Was it also necessary to be in a certain mind set to write these two songs?
you have to take the time to connect on a different level, invest in a new way. And  when it becomes a collective thing it start to work.

– You have trusted in Ván Records to release it, I guess it was something natural  considering the relationship you have had with them. Was it important for you to have Ván release it?
It was the only option now, I don’t know if theres  anyone else around that believes so much in this group of musicians and that works both ways.

– All this about «Mourning Haze / Drops of Sunlight» being said; how could you  describe the release in just 3 words?
Irrational minds possession

– Farida is the only of you that has been out of the music world so to speak, she  hadn’t been on stage until Roadburn even though she has done some collaborations  with different bands. I can’t ask her personally but maybe MOLASSES and reuniting  with you to create something new has been like opening for her the door to  something new? To more music?
I can’t really speak for her, but its a totally different story to do a performance like this  and work towards it for a year then collaborations with others I guess. We are all  curious where this will take us.

– And where do you think will your journey with MOLASSES will take you? Is it a new  beginning? Will it continue after this?
We have to see, there is more in us that is for sure. We have to regroup and see what our next steps are. Whatever happens we’re are all grateful for this (re)connection it  has already given so much.

– That’s all, thank you once more for answering our questions. If you want to add  some final words; feel free to do it.