– First of all thank you so much for answering to our interview. How are you guys feeling doing right now?

Feeling great thanks and how are you!

– Some months ago you released a new album, entitled «Once a King». How has it worked until now?

– Now that I have the chance of interviewing you and though it has been a while since it came out, as I said earlier, I would like you to tell me a little bot how was this album conceived and if did everything come out as expected.

The Album was gonna be a Carl Sentance solo album, but I thought Persian Risk had a name and it would be better to release it that way, then I thought why not try get the band back together but the other guys were busy doing other things so I formed a new line up and im really happy with it. The songs I did try and write like it was 82 but im not that person anymore so it was hard but I think it works and theres more to come.

– Which band is supporting you right now and how did the songwriting of the songs born? Is there any old tune? Was it a team effort o did you already have in mind how it was supposed to be like?

Above is the current line up great guys! I had writen the 7 new songs on the album and used 4 old tracks ( 2 of them were never released. )

– Honestly, I didn’t liten to it until a few weeks ago, when I was told I could interview you and, frankly, I liked it a lot, it sounds powerful, with melody and class, and your voice keeps that essence purely British of bands such as URIAH HEEP. What differences do you think we can find between this CD and the 1986 album «Rise up»?

Its fresh and new, different players and more of my input on this album, and I had full control of it! Rise Up was the old band! when we did Rise Up we didnt have much control on how it was recorded and produced but the original band was a great live band I do miss it.

– You were part of the NWOBHM, though your sound is more melodic than several other bands. What were your thoughts on this movement? How did you live that period with your first LP?

Yes I am more melodic its the sound of my voice I cant change that. There are alot of great NWOBHM bands out there and the voice changes it. great movment great times it rocked.

Just busy doing other things and it just wasnt the right time untill now. it took me a while to get the new line up but HAPPY!

– Moving to another subject not realted to PERSIAN RISK, you were also with the Swiss KROKUS during the 90’s recording «Round 13». How was the experience of playing with them like and how did join KROKUS?

Great experience lots of big shows I never played before. I saw the add in Sounds or Melody Maker music papers.

– Besides this I guess during these years between your last two albums you may have done someting else. Were you still involved with the music world?

I was still involved with music and writing and wrote my solo album “Mind Doctor” also I did alot of musical Theatre in between.

– Coming back to the present; how is the gig and touring situation? Have you placed that much since the album’s release? 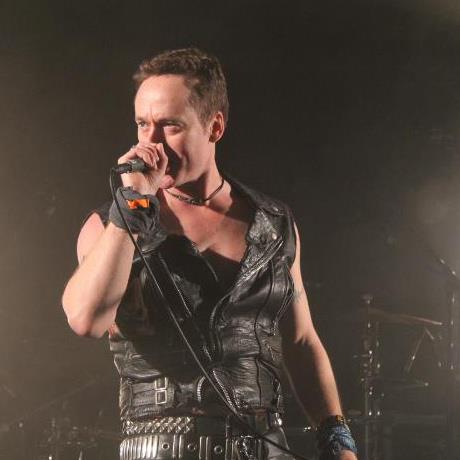 We havent done alot of gigs yet apart from Hard Rock Hell last year, but they are starting to come in now (including, Cambridge Rock Festival 4th Aug, Rock City 19th July and Headbangers Open Air 2013 25th-27th July in Hamburg, we also have 2014 Keep it True Festival in Germany.

– And on a view to the future; can we expect more albums by PERSIAN RISK?

Yes I am writing as we speak.

– That’s all from our side, our best wishes and for me it’s been a pleasure to talk to you. Hope we could see you in Spain sometime. Lots of thanks.

Thank you and sorry I took so long to reply.