– Hello Johanna, thank you so much for answering our questions. How is everything doing right now into THE OATH’s camp with the release of your debut album?

We are excited the album is finally out and that it seems to be doing pretty good so far.

– First off, how did THE OATH get together? You and Linnéa had an instant somehow magickal chemistry since the first minute so, what did make you think you should start a band together?

The band was founded by me and my best friend, our first drummer Vincent Wager. As we were looking for a guitarist, Henke of In Solitude put me in touch with Linnéa. They play together in Sonic Ritual and she had just moved to Berlin. It took us a night at a bar, talking about music and our ideas and the whole thing was sealed. At the same time Simon moved to Berlin to join us on bass.

– And was being a duo something you have always intended?

No, it was not intended and I don’t see The Oath as a duo. It just happened that drummer and bassist changed around a time of transition, meaning recording the album, the tour with Ghost last November, signing the deal etc. The core in the moment was Linnéa and I. The long term plan was always to be a full band though.

­– I have always thought band logos are an important part of the band, a big part of a band’s identity and the first thing listeners see of a band, and not too many acts pay much attention to it. I personally think yours truly captures the vibe and even sound on your muic, was this something you want to convey with it? How did it born?

We asked Erik of Watain to make our logo, who is a friend of ours. When I saw it the first time I knew that was the right symbol for this band. A logo functions like a magical sigil and there are some hidden meanings in it for us. Erik being a spiritual person like me was the right energy I wanted to have in this logo.

­– Last year you released your first release, which was an EP that already managed to draw a lot of attention. With such a solid first release, was it easier to make your full­length happen? What did that release mean to THE OATH as a band? And now you have just released your debut album. How does it feel holding it finally in your hands? How are you feeling toward the final outcome?

Yes, of course the buzz around the EP drew the attention of several labels to us faster. Though I must say I saw the 7 inch always merely as a demo and I am excited now that people finally get to hear the proper album, which I am of course very proud about. I’m sure every musician will agree that it is a strange excitement to hold your record in your hands as it is filled with the energy of a lot of heart, work and memories. Good and bad. A very emotional process boiled down to to this finished piece. A milestone in one’s life. Or maybe even a gravestone. A death at the end of a time period is always a new beginning too. 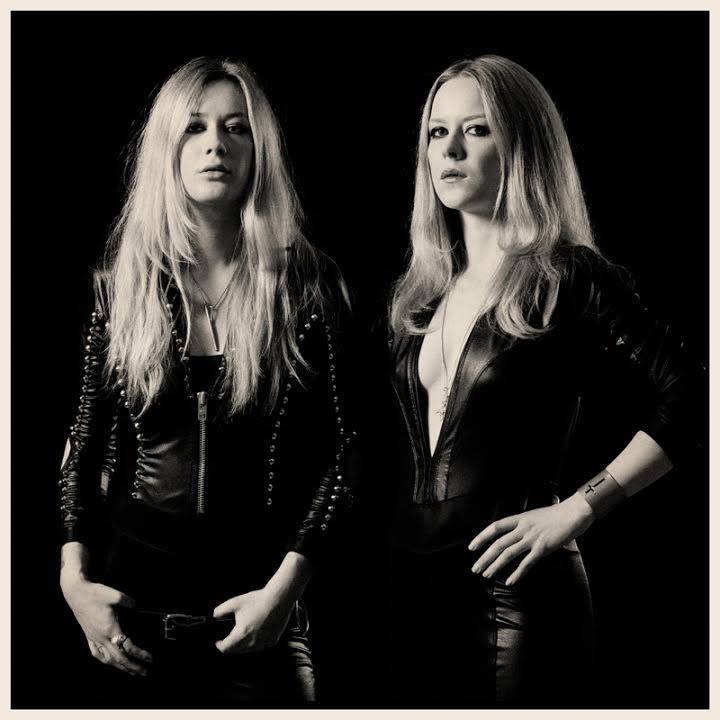 ­– This album is a mix of traditional influences dating back from the 70s and 80s, from Doom, Rock and a lot of NWOBHM but, what do you think have been the most influential bands for THE OATH’s sound?

Black Sabbath, old Ozzy, Mercyful Fate, Motörhead, Angel Witch, Trouble are all bands we are inspired by. Linnéa brings in some punk stuff like Discharge etc while I’m heavily influenced by Danzig and then again 70s Heart, Jefferson Airplane and even Fleetwood Mac.

­– It also has a lot of spiritual content. In that sense, what are your inspirations?

Mostly Death. My relationship to death, the death of people I’ve been close with and how I spiritually deal with this, the purpose of my life and what lies beyond it all. Life itself and all things involved – Sex, drugs, rock and roll and the way everything is connected.

­– In fact you are the responsible for the lyrics on it so, what themes are you touching here?

On top of the mentioned themes you will find stories and metaphors connected to my life. The lyrics for «Leaving Together» for example I’ve written for a very close friend who took his life at a very young age. This song is me reaching out to him, beyond, in a sisterly way when I feel the darkness myself very heavy on me. When that demon and darkness is rising within you.

­– It feels like THE OATH is a culmination of different passions and interests of you, I guess it may be a blend of things you have absorbed with the years but, how did you get into the different passions that are reflected on the album (from the music to the occult for example)?

Yes, this album is the child of all things compiled musically and emotionally over the years. A witness of life up until this point. Passion is the right word here for sure. I believe anything you do in life should be done with passion or not at all. Obviously we are very passionate about music and all things beyond the obvious.

­– This being said; what is THE OATH and its music for you? Maybe a way to channel certain energies among other things?

The Oath’s music is all things soaked up and channeled out of us again as our music. Like Eliphas Levi’s Baphomet principle „Solve et coagula!“

­– Musically you have gotten a really organic sound, with a live vibe. You recorded the album in Sweden but, how was the process like? Did you get the sound you were aiming for?

We recorded a lot of the album live and pulled the material on an old tape machine during the process. We are big fans of classic old Hard Rock and Heavy Metal productions and wanted to retain this raw, organic and not overly produced feel for our album. The kind of sound that is pure, honest and goes straight to the heart. We picked this studio because In Solitude had recommended it as they recorded their last album there and we dig it’s sound.

­– The musicians that played with you on this recording were Simon Bouteloup and Andrew Prestidge, the same ones you have played live with but, will this «team» be changing?

­– There’s also some guitar work by Henrik Palm (IN SOLITUDE and Linnéa’s mate in SONIC RITUAL). How did this arise?

Henke was hanging out with us quite a lot during the recording of the album at the studio in Stockholm. So it came about. There’s a hidden guitar howl from Erik in there somewhere too. It’s good to have the spirit of people who mean a lot to us as friends in there.

­– All this about the album being said; how could you describe it in just 3 words?

To me the album is magickal, passionate and dark.

­- As I said earlier, you have played live quite a lot, in fact by the end of 2013 you toured with GHOST, a band that in just a few years has got an enormous success. How this supporting them affect THE OATH in terms of exposure?

It was great to be on tour with a band that I love. I had put up their first Berlin show so it was exciting for me to tour with them as this was the right audience to be associated with.

­– You were also a Fenriz’s «Band of the Week». Did this also have any kind of impact on you?

This spawned interest in us within the underground scene and triggered a lot of things that followed I suppose.

­– In fact this debut has been released by none less than Lee Dorrian’s Rise Above. Was it easy to get a deal with such a reknown label? How does it feel? It seems like a good home for bands into your style.

We had gotten offers from several label but picked Rise Above for their passion towards their bands. It was the best choice for sure.

­– You are playing a really traditonal style, and it now seems to be an hype for this kind of vibe, but the Metal scene in general has changed a lot throughout the years, specially with the appearance of social media. How do you think has the Rock and Metal world evolved compared to the 90’s?

Well, I’m glad there is a revival in the classic style of Hard Rock and Heavy Metal as this is the music I grew up with and adore. The social media has definitely made it possible to get introduced to a lot of bands, that maybe wouldn’t have gained exposure back in the day. Good and bad ones surfacing in the mass. But luckily a natural selection will come with time and word of mouth about which ones of this flood of bands are really good. So all in all this development is great and more democratic than the old school style of label politics alone.

­– It has also changed in terms of crowd and festivals for instance, bigger festivals don’t use to have a place for bands like you, but for instance this summer you will be playing at Muskelrock, a smaller festival bu with really good bands, both classics as newer bands keeping the old roots of Heavy Metal. Do you think traditional styles into Metal are slowly getting more recognition lately?

Yes, obviously a lot of contemporary bands are returning back to the classic roots of quality Rock and Metal. It’s a good thing!

­– From Queens of Steel we have always brought special support and promotion to women into the Metal and Rock scene, so I can’t actually help asking you a couple of things in concern. First of all, do you think the role society and fans tend to gave female musicians into this world has changed over the years? As even though many people respect and admire female Metal musicians doing their own thing, into the Metal world people tend to illustrate differences between both genres instead of highlighting similarities or use gender as a promotion tool.

Well, luckily overall boys seem to be more accepting of the fact that it doesn’t fucking matter what gender you have if you’re passionate and sincere about

what you do. Of course there are still some peeps out there that didn’t get the message that it’s not the 18th century anymore but what do we care?

­– In that sense, how do you think even the media has something to do with this? It’s almost impossible to find a review of an album created by female musicians without hightlighing the fact, or the are even critics that prejudge just by that same fact. It seems like some people don’t see just the music as the main thing and don’t even consider this is sexism. Could you say this is just of being narrow minded?

Of course it is completely narrow minded but the trick in life is stand above the simplicity of uneducated morons and have some humor about it.

­– Finally, what are the near­ future plans for THE OATH? What can we expect from you from now on?

I have to hang the shroud of mystery over it. No worries, it will be lifted in time!

­– That’s all from our side, thank you once more for taking your time. If you now want to add some final words; last lines are all yours.