– Hi, thanks for your time. What are you currently up to? How is everything doing right now with SCHANDMAUL?

We are at the moment about to end our opening tour to the new album. Everything went really well. Many people listening under amazing atmosphere.

– First off, would you mind to explain the meaning behind the band’s name?

Schandmaul is the symbol connected with the joker, the harlequin at the king´s court, the one, who is allowed to say anything, he wants to.

– Your latest album, «Unendlich» was released last January so, how has its feedback been? Did it fulfill your expectations?

It did exceed all our expectations. We entered place 2 in german media control charts and the feed back is really good on it.

– This record came out 3 years after your previous effort came out so, how do you think has the band evolved throughout these last 3 years?

The most important innovation is maybe, that for the first time, we nearly managed to transfer our lively live Sound and live feeling into a record. We also did a political statement for the first time: against racism and Nazi ideas.

– You are a band characterised, among other things, by mixing instruments such as Irish bagpipes and violins with electric guitars. Where do you draw inspiration from to create your compositions?

There are several composers in the band and everybody has his own sources for creativity, this can be a book, a movie, your emotions or just something, that happened to you. The musical diversity comes by itself because of all the instruments, we play. We don´t think too much about it.

– «Unendlich» sounds really diverse, have you broaden to new influences? Because, for example, «Märchenmond» sounds a little bit proggie, «Tangossa» is Bossa nova and «Little Miss Midleton» has a lot of Irish Folk.

As already mentioned, several musicians are composing, so everybody brings in his musical preferences and experiences. It is important for us, to allow such high diversity in our music.

– I think this newest opus goes back to the roots of the band at the same time you reinvent yourself on the best possible way, hightlitghning that return to a Folk Rock where a group of bards tell a lot of ancient stories. How easy is to, somehow, review your roots still sounding fresh and offering new ideas?

Frankly, we did not think too much about it. Concerning the last album “Traumtänzer” our fans were missing funny stories and party songs, there was maybe too much emotion and ballad. So we focussed on telling stories (which is really a central element since the band has been existing). Moreover, we had some good ideas for fresh and lively songs, so we just did them and this was obviously, what fans were missing before.

– And what does inspire you to wirte your lyrics? What do they deal with?

I am mainly inspired by historic tales and my own emotions. Love and the opportunity to do important changes in your live are central themes in my lyrics.

– I believe German language fits perfectly your sound, as it provides a hugh strength and rough edge to your sound but, have you ever thought about singing in any other language?

No, because our lead singer Thomas does absolutely refuse to J, he says, he can only express himself in german.

– Do you think if you were singing in English you would get more recognition?

I don´t think so, because german language belongs to Schandmaul just like the violin or the flute. I prefer to stick to our own style, than to think too much about success and give away our own typical elements.

– All this about «Unendlich» being said; how could you describe it in just 3 words? 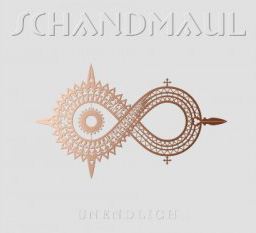 We are doing some few festivals in summer and then another huge indoor tour in autumn. Moreover, in autumn a new cd will be released: it is music and a book for children.

Thanks to you and see all the news on www.schandmaul.de or www.facebook.com/schandmaul

Hasta luego! (my Spanish is lousy!)