– Hello and, first of all, thanks for taking your time to answer to our questions. Your new album is about to come out, how are you feeling about it?
Thank you yourself! Feeling really good, although I hate listening to stuff I play on. It’s great that it’s out so we can get out and do shows and we already started writing on the next album. We just want to keep pushing forward.

– You are just a straight-forward, no-frills (old school sounding) Death Metal band, not seeking for innovation or experiments.  What are the goals and aims when you first form a band like this?
I don’t think we anticipated that we would ever make a record when we started out. We where just incompetent musicians trying to figure out how to play metal instead of punk. Goals keep changing for each one of us. Andreas told me a while ago that he just wants to try to write the ultimate riff and hang out with his kids. I just want to get better at drumming. The rest of the band really likes playing live and all that – touring, partying, you know, rocknroll.

– How and what were the first steps the band took until you got signed by Pulverised Records?
I think Andreas posted some demo tracks online, pulverised found them and asked if we wanted to make a record. Which is crazy because when does that ever happen nowadays? It felt like a joke.

– Your sophomore album is «Diorama of Human Suffering». How could you say has the evolution been since your debut came out?
I don’t know. Speaking for myself now. I the beginning I think we were consciously writing songs that was supposed to sound like old school Swedish death. We were using hm-2s and they are so significant for that sound it’s like everything you play sounds like dismember. Andreas and Daniel don’t really use the hm-2s anymore, it’s a wider field now, it easy to get heavier and more drugged out sounds without them. But we still play our old material, it’s harder to play the buzzsaw parts without the extreme compression from the pedals. We also tune lower now. But that is not my problem haha.

– I find the new record a little bit more diverse, it has a stronger AUTOPSY vibe to me. Are they an influence to you? Also, what are some of your main musical and non-musical influences?
We all consume a lot of music in so many genres so you would get very different answers from each of one of us. Yes we have been listening to Autopsy a lot but that was more before. I listen to Sonne Adam a lot, I love the drummers heavy Melvin’s influence on the drums. But as for namedropping goes, we live close to Copenhagen and it is really cool and inspiring to be able to take part in that scene. There is a lot really cool people that play in really good bands like undergang, taphos and hyperdontia and more. Also Vastum and Necrot from Oakland is pretty amazing.

– Is there a specific reason for this variety? Has the songwriting been more of a collaborative effort perhaps? 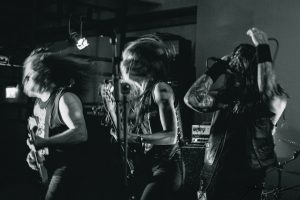 No not at all. Andreas writes all the music. Since the first album Rille moved to Gothenburg which makes weekly practices kind of impossible. So Andreas and Daniel writes lyrics now too. Me and Andreas have this other band where all the members writes music and is very all over the place. So when we started Bastard Grave we really wanted to have one songwriter so we could have consistency. That idea is still intact but we still evolve. The next album is going to be different from this one, I hope.

– This being said, did you have clear what kind of sound did you want for this opus? How did you work on this aspect of the album?
Yes very. We wanted the dirtiest murkiest anus sounding soundscape, but Ulf is too good so we ended up halfway which in hindsight is perfect.
– The sound is really dirty and thick. How did you record the album?
We recorded live in a really cool studio that Ulf works in. And then the usual bs to make it heavier, cheating with the bass drum, guitar dubs etc. Nothing out of the ordinary. I think it’s just the songs that are heavy.

– All this about «Diorama of Human Suffering» being said; how could you describe it in just 3 words?
Brutal Pete Rules

– You have always been to make like an old school Swedish Death Metal band mixed with BLT THROWER. I can feel the BT vibe in that Punky way of doing Metal but, how could you describe BASTARD GRAVE?

If we were better musicians we wouldn’t sound as punk.

– In fact you come from the Punk scene. How does it feel to be embraced and be part (kind of) of a different «scene»?
People is generally really cool and im not sure if there is a big difference. Metal heads and punks usually hang out at the same places, usually a place that has loud music and beer. I was listening to metal before I started listening to punk, which i think is true for many people. From my generation at least. We are for the most part still doing stuff in a DIY-context so it’s pretty much the same as before.

– One of the down sides of today’s Metal scene to me is this fascist uprising we’re experiencing and not a lot of bands make a stand against that. Coming from a politically committed scene, what are your thoughts on this? Is it important to BASTARD GRAVE to position themselves in this issue?
A couple of years ago a record label showed some interest in us and when we checked out their rooster they had this mix of death metal oi punk and white supremacy thing going on. We were laughing at it at the time. But it’s not fucking funny. Last time we saw Entombed they opened the show by saying “We are Entombed and we play anti-fascist death metal” which gave me an erection. Fascism and moralistic superiority is the exact opposite of death metal. Just fascists are too stupid to read the lyrics.

– That’s all from our side, thank you once more for answering to our interview. If you’d like to add some final words; feel free to do it.
Thanks for writing about us! I’ll end with an Oscar Wilde quote – “I am so clever that sometimes I don’t understand a single word of what I am saying.” Peace